Charles R. (Bob) Hitz is a marine biologist who worked for the U. S. Bureau of Commercial Fisheries Seattle, Washington’s Exploratory Fishing and Gear Research Base (EFGRB) from 1960 to 1970. He, along with their research vessel John N. Cobb, was transferred to the National Oceanic and Atmospheric Administration (NOAA) in 1970 which was absorbed into NOAA’s national fleet of research ships and home ported in Lake Union at the Pacific Marine Center, Seattle.

The John N. Cobb was decommissioned on August 13, 2008 after serving the country as a research vessel for 58 years and then she was placed on the list of U.S. National Sites. Bob thought that the early history of the Seattle’s EFGRB, along with that of R/V John N. Cobb should be recorded and that Carmel Finley’s blog was an ideal method of presenting parts of it. He will continue posting his experiences of those times he was at the EFGRB and aboard the Cobb.

Bob was born and raised in Bellingham, Washington and went to WSU in Pullman, Washington where he received a BS in zoology. After being drafted into the Korean conflict he returned to civilian life and enrolled as a graduate student at the University of Washington’s College of Fisheries, where he did research on the spawning time of two species of rockfish, the brown rockfish Sebastodes auriculatus and copper rockfish Sebastodes caurinus. He began work with the government in 1960 because of his interest in rockfish.

He is now retired and lives in Stanwood, Washington. He’s still interested in the John N. Cobb and is involved with her history along with that of Seattle’s Exploratory Fishing and Gear Research Base.
. 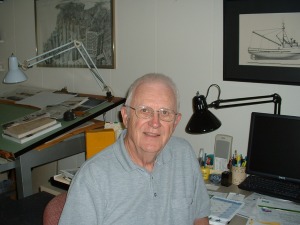 Bob can be reached at: bobhitz@wavecable.com.

1 Response to About Bob